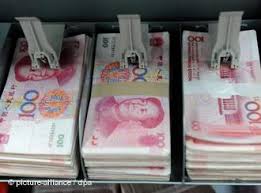 As China takes it currency global, Zurich is set to become a center for yuan trading in Europe with Chinese and Swiss officials poised to sign a financial deal on Wednesday.
“A memorandum of understanding will be signed between the central banks of the two countries during Chinese Premier Li Keqiang’s visit to Switzerland. It is an important step in the internationalization of the RMB, especially in Europe,” a government official was quoted by Chinese news agency Xinhua.

Switzerland is basing its push for the offshore yuan business on the country’s close ties with China, one of the nation’s biggest trading partner. Switzerland is the first country among the world’s top 20 to have a free trade agreement with China.

Under the deal to be signed on Wednesday, China will give Switzerland a quota of 50 billion yuan (about $8 billion), under its Qualified Foreign Institutional Investor (QFII) scheme to support the establishment of the Zurich offshore