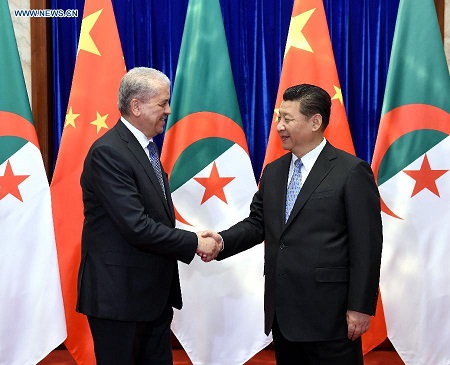 “China and Algeria are bothers,” Xi said during the meeting at the Great Hall of the People, hailing mutual support, mutual trust and solid friendship between the two countries in their efforts for national independence, sovereignty and prosperity as well as world peace and development.

China and Algeria announced the comprehensive strategic partnership in February 2014 on the 55th anniversary of the establishment of diplomatic relations and the 10th anniversary of strategic cooperation between the two countries.

As the establishment of the partnership marked a new phase for the bilateral ties, Xi on Wednesday suggested that the two sides work together to further advance the China-Algeria relationship.

He proposed the two sides continue enhancing mutual trust, strengthening strategic communication, supporting each other on issues involving each other’s core interests and major concern, and increasing coordination on issues regarding international order and the rights of developing countries.

The two countries’ development strategies are highly complementary and adaptable to each other, Xi said, adding that the Chinese side stands ready to play an active role in Algeria’s development.

He called for more exchanges between the two sides on culture, education, medical care and mass media.

This year marks the 15th anniversary of the Forum on China-Africa Cooperation.

Lauding the friendship between Algeria and China, Sellal said the Algerian people are appreciative of China’s long support.

Algeria is a reliable friend of China, Sellal said, adding that the purpose of his China visit was to advance the partnership, especially to advance economic cooperation between the two countries.

Sellal is visiting China from Tuesday to Friday. He is the first Algerian head of government to visit China since the north African country won independence in 1962.

The Algeria-China cooperation can be highly adapted to the Belt and Road initiatives, both blessed with great prospects, said the visiting prime minister.

Sellal said the Algerian side is fully confident of the development of the partnership and believes China will be an even stronger partner of Algeria in the African country’s economic and social development.

He agreed with Xi on increasing people-to-people exchanges to cement the friendship between the two nations.

Algeria and China hold similar views on many major international affairs, Sellal said, adding that Algeria will stick to the Bandung Spirit, committed to promoting peace, stability, justice and development of the world.

Algeria stands ready to participate in the cooperation with China under the framework of Beijing’s Belt and Road initiatives as well as the Forum on China-Africa Cooperation.

China, Algeria to jointly push for progress in partnership

ALGIERS, Feb. 7 (Xinhua) — China and Algeria will work together to achieve further progress in their bilateral ties, officials of the two countries said here on Saturday.

During a meeting with Algerian Prime Minister Abdelmalek Sellal, visiting Chinese State Councilor Yang Jiechi said the purpose of his visit to Algeria this time aims to facilitate the implementation of the consensus made by state leaders of the two countries, to strengthen high-level dialogue and to develop cooperation in various fields so as to further enrich China-Algeria comprehensive strategic partnership.