In search of dream island 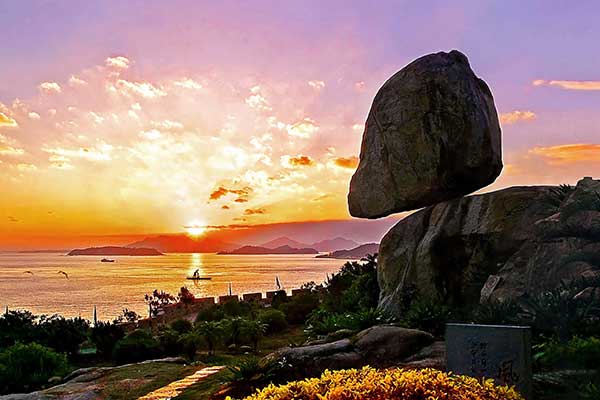 Whether your dream island trip in China is to spend a few days sunbathing on white beaches,or to explore the rich coastal history heritage of this country, Dongshan county offers bothchoices.

Perched on southeast China’s sunny coast less than one kilometer east of Fujian province,Dongshan is China’s sixth largest island and is edged by seven beaches, with sparkling waterand white sand.

Serially connected, the seven beaches stretch to 30 km. Ma Luan Wan, the most popularbeach, is 2,500 meters long and 60 meters wide. The waters here are relatively calm, andthere’s plenty of sand to build castles or simply to sunbathe.

Ma Luan Wan is also known for its not-to-be-missed sunrise and great views of leafymountains. Ninety-four percent of the island is covered by forests, mostly banyan trees,thanks to six decades of tree planting. The soft air enveloping the island blends into abeautiful banyan-fringed haze.

In 2013, Dongshan was listed among Fujian’s “ten most beautiful islands” by the provincialgovernment. It is also a provincial-level reef conservation site and a national biodiversityreserve.

In addition to swimming and sunbathing, beachgoers here can snorkel or ride boogie boards.Dongshan is also a kite-flier’s dream, with wide flat natural beaches and enduring winds. In2014, kite-fliers from Hong Kong and other coastal areas came to Dongshan for aninternational kite-surfing contest, which the county has been holding for years.

On the day I visited the island, the turquoise water was relatively shallow and the sandssparkled against a backdrop of towering granite boulders, worn by time and weather. One ofthe rocks, Feng Dong Shi, or “rock moved by wind”, is Dongshan’s landmark and the mostphotographed site.