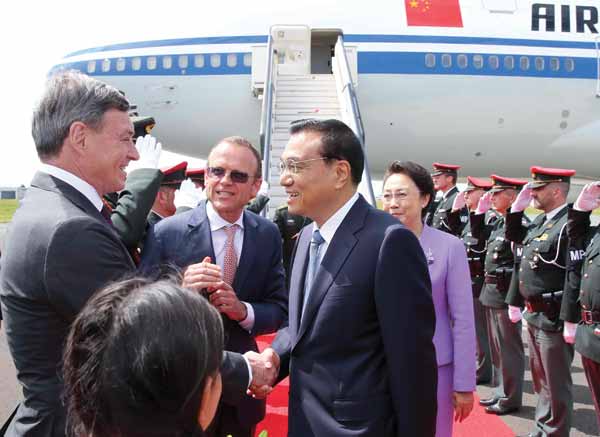 Premier Li Keqiang arrived in Brussels on Sunday afternoon, hoping to pair the Chinese leadership’s biggest economic ambition, its Belt and Road Initiative, with the need for liquidity and infrastructure upgrading in Europe.

At the same time, 14 European countries are among the 57 prospective nations expected to sign the final articles on Monday for the China-led Asian Infrastructure Investment Bank, an institution set up to finance regional infrastructure construction.

If both proceed as planned, experts said, more synergies between the economies of Europe and Asia will be created.

Both events will promote domestic demand in Asia and Europe and help lift China’s sluggish exports, said Zhao Junjie, a researcher on European international relations at the Chinese Academy of Social Sciences.

Fredrik Erixon, director of the European Center for International Political Economy, a think tank in Brussels, says Europe is investing in domestic infrastructure, some of which can be connected with the Belt and Road Initiative.

However, whether Europe can play a big role in the Belt and Road Initiative depends on many things, including capital, Erixon said.

“The simple fact is that European countries think very differently about the initiative, and not all have the money to spend.”

While in Brussels on Monday, Li will attend the 17th China-EU leaders’ meeting, the first since the change of EU leadership, after addressing a China-EU Business Summit to outline new economic opportunities for more than 400 businesspeople, and meeting President of the European Parliament Martin Schulz.

Cui Hongjian, a researcher of European studies at the China Institute of International Studies, said Li will look for new ways to expand China-EU cooperation during his first meeting with EU leaders, and international and regional issues will be on the agenda of the leaders’ meeting.

“There are increasing cooperation opportunities for China and the EU, such as connecting each other’s development strategies. Both China’s Belt and Road Initiative and the Investment Plan for Europe are related to infrastructure construction and intercommunication,” he said.