Car involved in fatal crash was going at 195 km/h 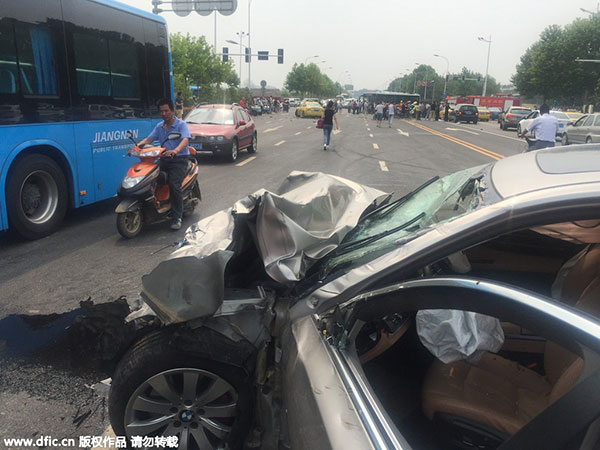 A car that crashed into another vehicle killing two on the spot was going at 195.2 km per hour, according to traffic police in Nanjing, Jiangsu province.

Nanjing Traffic Management Bureau said the BMW was over the speed limit and ran the red light when the accident happened on June 20, reported Shaanxi-based Huashang Daily on Monday.

The speed limit on city roads is between 40 km/h to 60 km/h while the car was going at 195.2 km/h which is nearly the speed of a bullet train.

The vehicle was going so fast that it would have taken it only 10 minutes to complete the whole 32.7-km-long second ring road in Beijing.

The police said the BMW driver was responsible for the fatal crash and will be arrested soon.

The driver faces three to seven years of imprisonment. But some legal experts believe that as the car was going so fast, the accused should be charged for threatening public security, an offense that carries 10 years sentence, life imprisonment and even death penalty.

Accident Review: Driver in death crash was not on drugs, police confirm

A driver involved in a fatal accident was not on drugs and powder found in his car was corn flour rather than methamphetamine, the Nanjing-based Yangtse Evening Post reported on June 22.

His BMW hit a Mazda when it tried to run a red light at a road crossing in Nanjing on Saturday, killing both the driver and passenger in the Mazda. The BMW driver ran away but was later caught, according to police.

Earlier reports said the suspect had no driver’s license or vehicle license and police had found methamphetamine in his car.

A further statement by Nanjing police on Sunday confirmed that the driver, 35-year-old Wang Jijin, held a valid driver’s license and had not been taking drugs. The BMW had been given to him as payment for a debt by the car’s owner.

DNA testing confirmed that the man detained was the BMW driver who had left blood in the car due to the accident, dispelling rumors that he was a scapegoat, the report said.

Wang was scared and became emotional after police found him, which explained why he smashed his head against a wall at the police station, according to the report. The police said they had to place a helmet on him as a precaution.