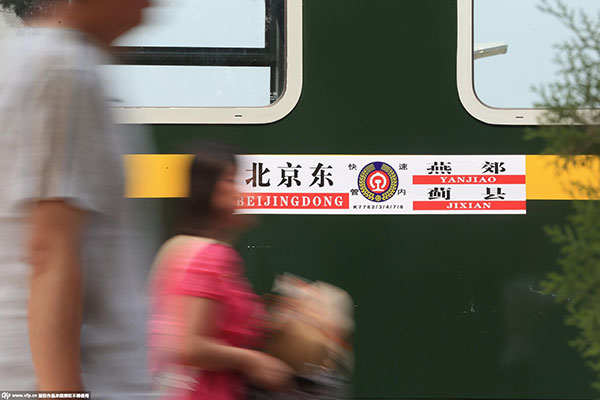 More young people are starting to choose cities around Beijing as their base for work and living as the integrated development of the Beijing-Tianjin-Hebei region provides new opportunities, Beijing Youth Daily reported.
A post-1980s entrepreneur, surnamed Wei, has opened an innovative education institute at a business incubator in an economic-technical development zone in Qinhuangdao, North China’s Hebei province, where his wife lives, after 10 years running a business in the capital.

“I commuted between Beijing and Qinhuangdao by rail for quite a time. I was struggling for money and with my health. Such a life is too tiring,” he said.

In February, President Xi Jinping called for the coordinated development of the region around Beijing to build a trilateral economic sphere in the Bohai Bay area.

The Jing-Jin-Ji integration (Jing is for Beijing, Jin means Tianjin, Ji is traditional use as in Hebei province) has been planned as a national strategy to alter functions of the regions around the capital and ease Beijing’s oversized population, congestion and pollution.

The planned megalopolis is meant to revamp northern China’s economy and and become a laboratory for modern urban growth.

The new region will link the research facilities and creative culture of Beijing with the economic muscle of the port city of Tianjin and the hinterlands of Hebei province, making it easier for the areas to work together.

As part of the three regions taking over non-capital functions from Beijing, Qinhuangdao economic-technical development zone built up a base for scientific research institutes to relocate in May last year and a business incubator for high and new technology companies early this year.

“The incubator provides projects and start-ups with services such as an office, early investment and industry chain incubation. Qualified companies can also enjoy rent-free office space for 6 to 24 months,” said Lyu Aiguo, deputy director of the management committee at the zone.

Wei’s company is one of the beneficiaries.

“My company enjoys preferential policies in many areas, such as registration. The office is also free of charge,” said Wei.

More than 10 companies have settled in the incubator, either branches of Beijing-headquartered businesses or set up by Qinhuangdao residents who used to work in the capital, said an incubator employee.

These forward-thinking young people are not satisfied with only working in desirable places but also living there.