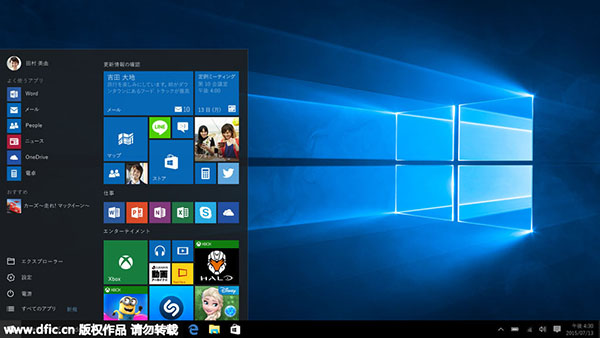 Microsoft Corp introduced Windows 10 on Wednesday, hoping the latest addition to its 30-year-old operating system family will catapult it from a losing position to the top slot in the mobility software market.

The latest version of its operating system is a mixture of similarity and freshness. For starters, it has brought back the task bar and the iconic start button, making the system easier for existing users to handle.

The United States software giant has also introduced an array of new features. A new browser called Edge will replace the Internet Explorer although the IE is still available for use. Microsoft’s Siri-like voice assistant tool Cortana is also available for users.

And the company has installed Xiaobing, a chat robot/voice assistant tailored for Mandarin speakers, in the Chinese version of Windows 10.

“I like the design of Windows 10, it looks stunning and has a lot of new features that I would love to try out,” said Qiu Lin, a Windows 7 user in Beijing.

But Qiu was puzzled why the new system came with two similar voice assistants. “If Cortana understands Chinese and can help me set schedules, then why would I need Xiaobing? It confuses me,” she said.

Microsoft said Xiaobing, which collects snippets of real-life online dialogue on Chinese blogs and forums, will give users a more real-person-like using experience.

Shen Xiangyang, Microsoft’s senior vice-president, called Windows 10 a milestone for the company which is rapidly embracing the mobile Internet.

“It is the best Windows system we have ever made. It is not only a software, it is also an ecosystem that can help China’s booming Internet economy,” Shen said.

“China is important to us because it hosts a large number of hardware manufacturing partners.”

Windows 10 is also compatible with tablets and smartphones－the modern day platforms that Microsoft’s CEO Satya Nadella said will determine the future of the company.

Nadella has been attempting to transform Microsoft from a software maker into a cloud-based service provider targeting mobile device users since he replaced Steve Ballmer as the head of the world’s largest software company in early 2014.

Windows 10 is the company’s latest, and most likely the last hope, to take on Apple Inc’s iOS and Google Inc’s Android.

Gene Cao, a senior analyst at market consultancy Forrester Research Inc, said it will be very difficult for Microsoft to repeat the glory of the PC era.

“The new OS will find it almost impossible to change user habits (on mobile devices). Top mobile hardware makers are all aiming to develop their own OS, making it difficult for Windows 10 to expand,” Cao said.