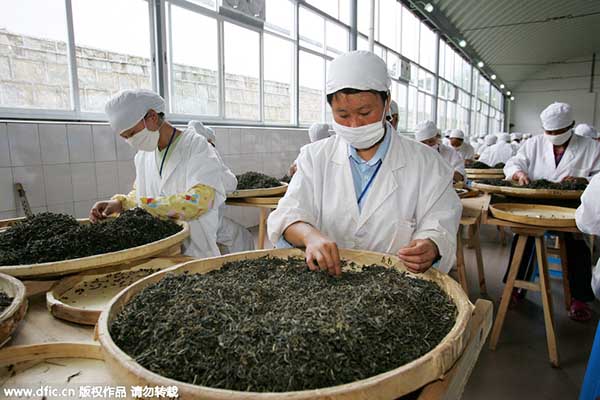 “One Belt, One Road” is a rare opportunity to turn Chinese tea consumption into a global phenomenon.

That is the dream of the country’s tea companies – still largely unknown to the world. They are ready to grab a piece of the action in an anticipated market boom.

“The Belt and Road Initiative is not just a rejuvenation of the ancient silk road, but also a comeback of the ancient tea road,” said Jiao Jialiang, chairman of LongRun Group, a Chinese conglomerate specializing in food and health products.

China’s tea industry will embrace an unprecedented window of opportunity as the Initiative presses ahead, added Jiao who is also a member of the 12th Chinese People’s Political Consultative Conference.

Tea is an important part of Chinese tradition, first used medicinally but now a favorite drink for many in the country and beyond.

The nation cultivated tea 6,000 years ago, enjoying the brew long before Egypt’s pyramids were being built, as new archaeological evidence in China reveals.

The findings were made by a Chinese research team investigating Tianluo Mountain in the city of Yuyao in East China where they discovered the country’s earliest remains of tea brewing.

For generations, growers and producers have perfected the Chinese way of manufacturing tea, and its many unique regional variations, writing the long and gradual story of refinement.

It’s believed the practice of tea culture can take the spirit and wisdom of humans to a higher level, and its study covers a wide field with rich content.