Heading in a new direction 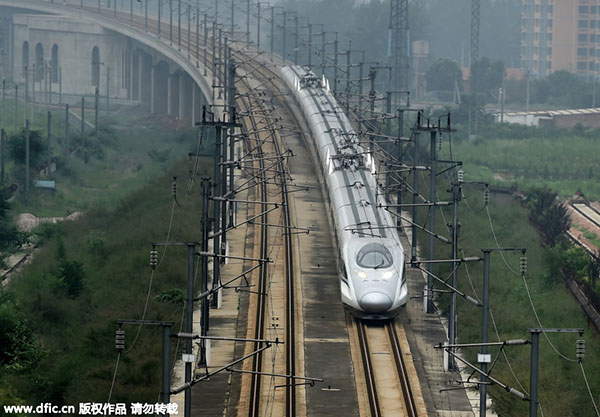 China will fully open its railway sector to private investment, the nation’s top economic planner said on Thursday, as part of the government’s efforts to boost the slowing economy.

Private capital will be encouraged to participate in the construction and operation of railways through joint ventures and sole ownership with a focus on inter-city railways, suburban corridors and feeder lines, the National Development and Reform Commission said in a statement.

It also said that private investors will be allowed to operate the transportation services of the freight network and the “going-global” projects of railway networks to ease bottlenecks in the railway sector.

“Railways are a major part of the transportation infrastructure construction sector, helping stabilize the country’s economy and adjust its structure. Attracting social investment will play a key role in deepening reforms in railway investment and financing and in accelerating the construction of the railway network,” the NDRC said.

Experts said the move would help expand the once-mighty but now debt-ridden railways by avoiding a further buildup of government debt and letting market forces play a bigger role.

Zhang Changchun, director of the Institute of Investment at the National Development and Reform Commission, said the plan to allow 100 percent private investment will provide many opportunities to privately owned enterprises and create a fair environment for competition.

“Though projects in railways are long-term investments, they offer steady returns, and hence very attractive to private investors,” he said.

At the same time, it also gives fresh impetus and a new source of funding for the sector, Zhang said, adding that it will further improve the country’s infrastructure construction.

Allowing private investment in the railway sector is part of the country’s plan to deepen its financing and investment mechanism and boost slowing economic growth.

Earlier this month, the NDRC approved infrastructure projects worth 884.2 billion yuan ($142 billion), including the construction and expansion of airports, bridges, high-speed railways, and the improvement of urban transport systems.

High-speed railways are considered as an alternative to replace the property sector to create jobs and drive China’s flagging economic growth.

Rail demand in China has soared in recent years and experts estimate that it will more than triple to 5 billion passengers a year by 2020.

In July, the State-owned China Railway Investment Corp opened tenders for 351 bullet trains, which could be worth more than 66 billion yuan, making it the first public bidding project after the merger of the country’s former top two train manufacturers, CNR Corp and CSR Corp.