Neither Chinese nor Western way of teaching is the best 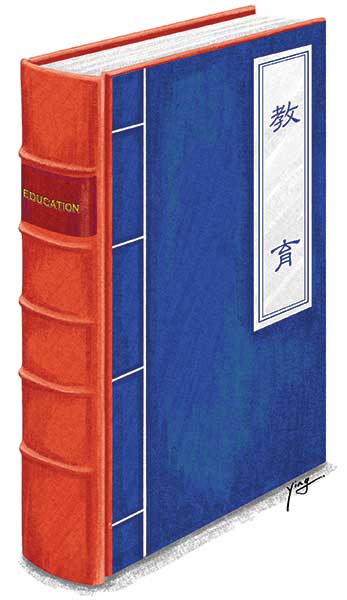 Chinese way of teaching and learning－with both its strengths and weaknesses－is revealed on a BBC show.

The BBC’s three-episode experiment with Chinese-style teaching did not so much set off the spark as fan the flame, which is the intermittent and often heated discourse on the merits, or more accurately lack thereof, of the traditional way of Chinese education.

There was the flashpoint four years ago of the book Battle Hymn of the Tiger Mother, whose central character, Amy Chua, used a typically Chinese approach to bring up her two daughters in the sharply contrasted learning environment of the United States.

Despite the dramatically enhanced cultural clashes so well packaged in Are Our Kids Tough Enough: Chinese School, the British documentary-cum-reality show neither surprised me nor shed any new light as far as I am concerned.

I’m no expert in education, but I see myself as the benefactor of both the Chinese way and the Western way (American way in my case) of learning. So I’ll base my arguments on empirical knowledge only.

First, as I see it there is no “best way”, a phrase so frequently brought up in the BBC series. I will not even say categorically that one way is better. But I do feel that for certain students or in certain phases of learning one method could be more effective than the other.

Contrary to the conclusion of many in the show, I tend to believe that the Western way is better for those who are bright and motivated. Generally, students in Western countries have more resources at their disposal, and family inadequacies tend to be less of a hindrance. For those who are smart but less motivated, the Chinese way gives the extra push one needs in one’s transformative years.

And honestly, for those at the bottom in terms of both intelligence and dedication, neither system will be their savior.

If we divide learning into roughly two components, imparting knowledge is the one in which the Chinese method really excels. There has to be a certain amount of hard learning, for example, memorizing historical dates and mathematical formulae. Sure, you can provide the context even for the most obscure facts, but it may not suit a 15-year-old.

It is in tickling imagination that the Chinese way falls flat, as almost every Chinese intellectual knows, and as is amply demonstrated in the TV program. Students are not encouraged to ask questions or challenge authority figures in other ways.