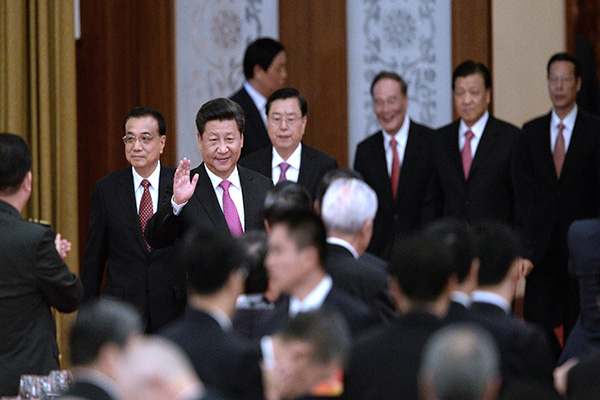 China can meet its main goals of economic and social development set for this year, Premier Li Keqiang said on Wednesday.

The premier made the remarks while addressing a reception at the Great Hall of the People marking the 66th anniversary of the founding of the People’s Republic of China.

“Facing a sluggish world economy and mounting downward pressure at home, we have adopted effective range-based, targeted and discretionary macro-regulation to ensure that China’s economy continues to move in a positive direction despite some ups and downs,” Li said.

“The economy still operates within a reasonable range, with the quality of development further improved and systemic risks effectively checked.”

He emphasized that China “will be able to meet the main goals and tasks of economic and social development for this year.”

The premier announced the main goals of economic and social development for 2015 when delivering the government’s Work Report at the annual session of the National People’s Congress, or the top legislature, in March.

According to the goals, the GDP is expected to grow by around 7 percent and the consumer price index by around 3 percent.

More than 10 million new jobs will be created, while imports and exports will increase by around 6 percent. Energy intensity – a measure of units of energy used per unit of GDP – will be cut by at least 3.1 percent.

The premier said on Wednesday that it is not easy for China, the world’s second-largest economy, to maintain a growth rate of around 7 percent on the $10 trillion GDP baseline.

“And it will be even more challenging to build a brighter future from the new starting point.”

To reach the goal, the premier said, China must further innovate the model of macro-regulation, expand domestic demand and adjust the structure of development.

It also has to build on the foundation of sound economic growth, improve the quality and efficiency of development, and effectively prevent and control risks of all kinds, he said.

He added that Beijing will “support Hong Kong and Macao in ensuring prosperity, stability and harmony and continued progress”.