CONSTITUTION OF THE COMMUNIST PARTY OF CHINA 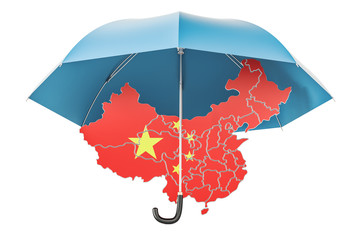 CONSTITUTION OF THE COMMUNIST PARTY OF CHINA

The General Program of the CCP Constitution6 (revised most recently at the 19th Party Congress on October 24, 2017) reaffirms the socialist market economy as China’s economic system and the CCP’s active role.
The Party must carry out fundamental reform of the economic structure that hampers the development of the productive forces, and keep to and improve the socialist market economy; […]
The CCP shall lead the people in developing the socialist market economy. It shall be firm in consolidating and developing the public sector of the economy and shall remain steadfast in encouraging, supporting, and guiding the development of the non-public sector. It shall give play to the decisive role of market forces in resource allocation and ensure the government plays its role better, and establish a sound system for macroeconomic regulation. The Party shall work to balance urban and rural development, development among regions, economic and social development, relations between humankind and nature, and domestic development and openness to the world. It shall adjust the economic structure, transform the growth model, and advance supply-side structural reform. The Party shall promote the synchronized development of new industrialization, information technology application, urbanization, and agricultural modernization, and shall build a new socialist countryside, take a new path of industrialization with Chinese characteristics, and build China into a country of innovation and a global leader in science and technology.
As such, the CCP is to lead the people in developing the socialist market economy, both with regard to the public sector – which the CCP is to unwaveringly consolidate and develop – and the non-public sector – whose development the CCP is to unswervingly encourage, support and guide. The General Program of the CCP Constitution closely mirrors the relevant provisions of the Constitution, making the roles of the State and Party practically indistinguishable.
While the role of the CCP in the Chinese system will be covered in greater detail in Chapter 3, it should be noted that all key policy initiatives stem from the CCP. In the case of the 13th Five Year Plan (‘FYP’) (see more in Chapter 4.2.7), the role of the CCP is explicitly reconfirmed in the introductory paragraph:
Formulated on the basis of the Recommendations of the Central Committee of the Communist Party of China (‘CPC’) for the 13th Five-Year Plan for Economic and Social Development of the People’s Republic of China (2016–2020), the 13th Five-Year Plan sets forth China’s strategic intentions and defines its major objectives, tasks, and measures for economic and social development. This plan is to serve as a guide to action for market entities, an important basis for government in performing its duties, and a common vision to be shared among the people of China.

5 See Section 3.4.4.
6 Full text of Constitution of the CCP, available at: http://news.xinhuanet.com/english/download/Constitution_of_the_Communist_Party_of_China.pdf (accessed on 24 November 2017).