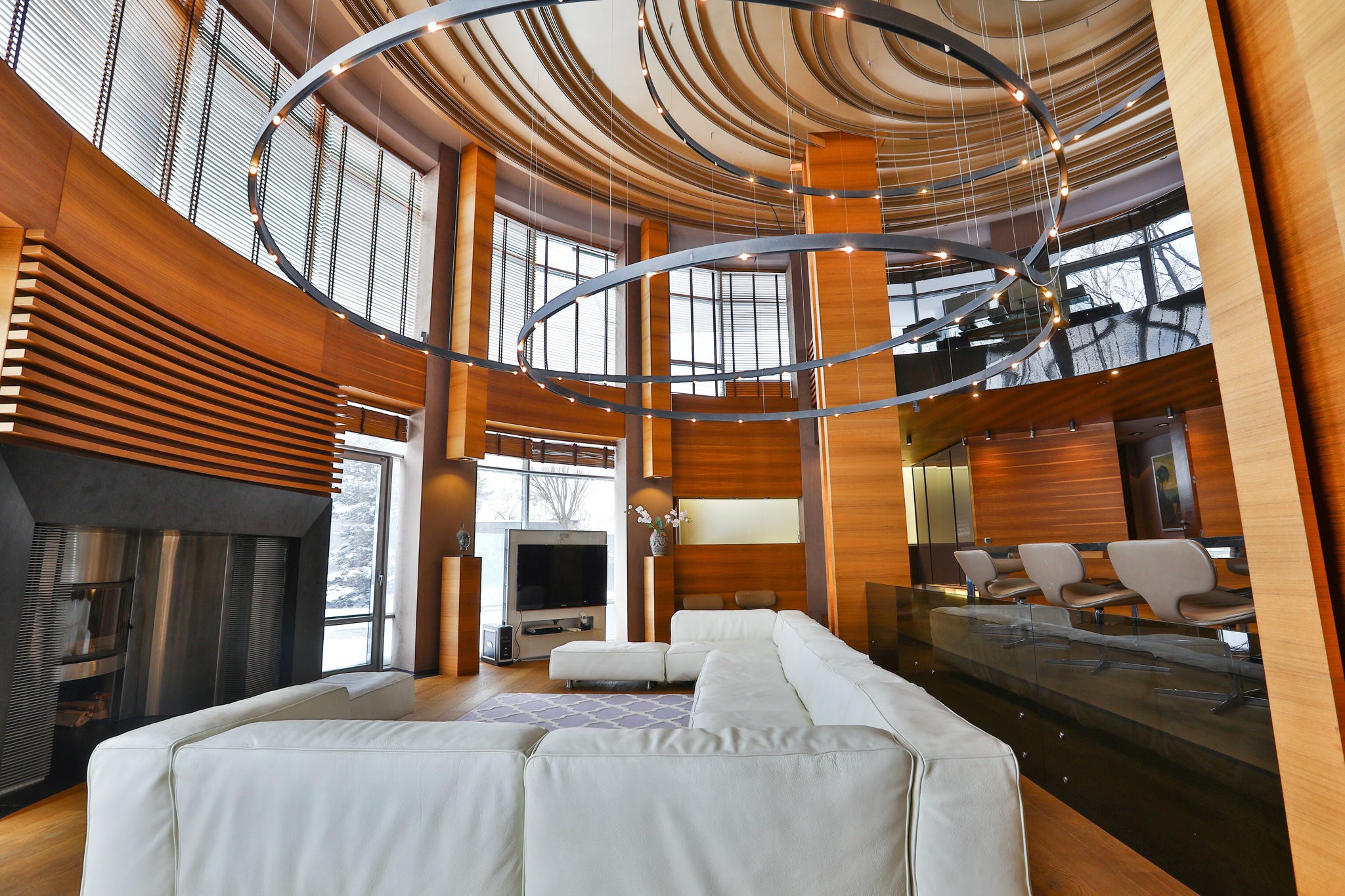 By The New York Times Company

Home prices in the capital city, Sofia, have been rising for years, but now that supply is catching up to demand, the market is slowing.

Four Bedrooms in the Capital of Bulgaria is $4.1 MILLION (3.6 MILLION EUROS)
This four-bedroom, four-bathroom home is in the Boyana neighborhood of Sofia, Bulgaria’s capital, a few blocks from the foot of Vitosha mountain.

One of the most expensive neighborhoods in Sofia, Boyana is “developing as the posh part of the city, with most of the luxurious housing concentrated there,” said Polina Stoykova, the managing director of Bulgarian Properties, which has the listing.

The 10,760-square-foot, two-story house, built in the 1990s, was designed by Atanas Panov, a local architect, and includes a sauna, fitness room and finished basement. The half-acre plot also has a two-car garage and a large backyard with an elevated garden and a swimming pool.

The owner bought the house in 2006 and made significant changes to the interior, installing hand-polished oak floors, walls and ceilings; soundproofing walls and doors; and putting in new light fixtures and a new kitchen, Ms. Stoykova said.

The dominant feature is a two-story living room rotunda wrapped in tall windows with views of Vitosha mountain to the south and downtown Sofia to the north. The room is anchored by a large fireplace and a circular light fixture that appears to float. The dining area, which contains a table that seats eight, is a step up from the open living area. A circular wood pattern on the ceiling swirls to a skylight in the center.

The furniture and artwork, including several sculptures, are included in the asking price, Ms. Stoykova said. The furniture represents a variety of styles, with a white leather sofa in the living room from the Italian design group Edra and several pieces made of Madagascar rosewood.

Built in the 1990s, the four-bedroom house was designed by Atanas Panov, a Sofia architect. The property includes a backyard swimming pool and elevated garden.
Credit
Bulgarian Properties 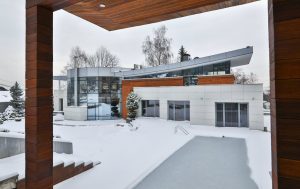 house in sofia with a pool

Built in the 1990s, the four-bedroom house was designed by Atanas Panov, a Sofia architect. The property includes a backyard swimming pool and elevated garden.CreditBulgarian Properties
There are three bedrooms on the ground floor, in addition to a sauna, gym and a small kitchen. The main kitchen, built during the renovation, is in the basement, with stainless steel Miele appliances, an island with a built-in teppanyaki grill and a steam oven. The basement has a space large enough to use as a playroom or media room, as well as a bathroom and a hallway connected to the garage.

Behind the house is a covered dining area and a Jacuzzi, in addition to the swimming pool. The backyard gardens received a “makeover” during the renovation that included new plants and lighting, and a granite-tile wall surrounding the property. 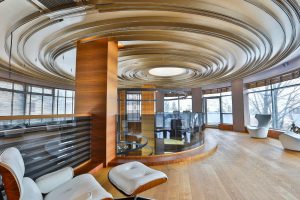 House in Sofia in Boyana

Once a village separate from Sofia, Boyana is popular for its parks, tree-lined streets and easy access to hiking and skiing on Vitosha mountain. Tourists visit the area for the medieval Boyana Church, a Unesco World Heritage site known for its colorful frescoes; a 14th-century orthodox monastery; and the botanical gardens on the grounds of the Bulgarian Academy of Sciences.

The property is close to the ring road, which provides an easy connection to central Sofia. There is a bus station a short walk from the property, as well as markets and a movie theater nearby. The Sofia international airport is about 10 miles from the house.

Housing prices in Bulgaria have been steadily rising for several years, the result of a growing economy and low interest rates, agents said. Across the country, prices were up 6 percent in the third quarter of 2018, compared to the same period a year earlier, according to an index provided by Bulgaria’s National Statistical Institute.

The oak-clad second level has long hallways built off the main rotunda, as well as the master bedroom, space for an office and access to two balconies.CreditBulgarian Properties
In Sofia — Bulgaria’s largest city, with about 1.2 million residents — prices were up 7 percent in the third quarter of 2018, compared to a year earlier, and they were 36 percent higher than during the same period in 2015, according to government data.

But in the recent months, the market has been slowing, agents said. “There is a clear downward trend in the growth rate of the number of transactions and the volume of mortgage lending,” said Tetiana Chernyshova, an agent with BiB Group, a Bulgarian real estate agency.

Still, “we do not expect that prices will have a significant fall unless something happens with the European economy on a larger scale,” said Zlatka Georgieva, the managing partner of Best Bulgarian Properties.

After a surge in construction across the country, primarily of apartments, the supply of homes in Bulgaria is catching up to demand, industry executives said. “Property developers have actively begun construction of new-built properties in almost every big city,” said Nevena Stoyanova, the managing director of Luximmo, a property consultancy.

Stanislav Petrov, the founder and managing director of Select Properties Bulgaria, said more than 80 percent of his clients in Sofia are buying apartments, with prices averaging about 1,120 euros a square meter ($118 a square foot) for a two-bedroom.

But while Sofia has a large inventory of apartments, there aren’t many new houses, which has put a premium on those in neighborhoods like Boyana, agents said. And those higher prices have resulted in slower sales in Boyana, compared with other areas of Sofia.

The ground floor includes a sauna and a gym.
About 80 percent of buyers in Sofia are local. But “Sofia has been on the international radar for over a decade,” she added, and her company sees a steady stream of foreign buyers.

Most foreign buyers in Sofia are looking for apartments as an investment.

The international buyers are primarily from European countries like Britain, Ireland, Belgium and France even from China, as well as neighboring Greece, Serbia and Macedonia. She said she has also had clients from the United States, Canada, South Africa and Australia.

Buyers from Russia were once common in Bulgaria, Ms. Chernyshova said, but since the escalation of the Russia-Ukraine conflict in 2014, that market has slowed. Now about half of her clients are foreign, she said, most of them from Germany, France, Belgium and Italy.
Bulgaria, which joined the European Union in 2007, can be a complicated place for foreigners to buy property. Typically, noncitizens are allowed to own buildings, but not land, although there are exceptions for citizens of other European Union countries. Foreign buyers often set up companies to buy property.

The lev remains the official currency of Bulgaria, but its value is tied to that of the euro, as the country prepares to adopt the euro officially, and properties are routinely listed in euros.

Foreign buyers should hire an independent attorney — not connected to the listing agency or the seller — to check the property for debts and ensure that there are no liens on it.

One twist to watch for: In Bulgaria, outdoor areas like patios are often included in the calculation of the home size. As a result, the interior living area might be 15 to 20 percent smaller than advertised. (The square footage of this house, for example, includes the balconies.)

A circular wood pattern on the ceiling swirls to a skylight in the center.
Languages and Currency
Bulgarian; Bulgarian lev (1 Bulgarian lev = $0.58) and euro (1 euro = $1.14)

Taxes and Fees
Buyers typically pay closing costs of 8 to 10 percent of the sale price of a home, including local transfer taxes, agents said. Notary fees are typically 4 to 6 percent of the property’s value. Agent commissions are usually 3 to 7 percent.