Martenitsa is one of the most distinctive pagan rituals in Bulgaria. 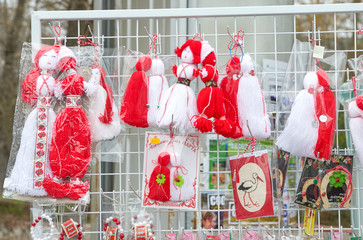 It embodies many symbols – the welcoming of spring and the sun, the taming of nature by means of magic, propitiation of the unpredictable March.
In the Bulgarian folklore, March is the women’s month – often due to the changing weather and reviving nature, which is getting prepared to bear its fruits in summer.
People called the month Baba Marta (Grandmother March) and considered, that for it to
be happy and smiling and to bring sunshine, it needed to be rejoiced. Young and old were
taking care for the good mood of Baba Marta. Young people were getting up early before
everyone else in order to meet the first day and rejoice with their youth and beauty Baba
Marta. Оld women were knitting twisted strands of red and white threads – everyone in the house adorned themselves with martenitsi. These decorations were believed to protect people from diseases and evil forces.
Old women were casting charms, while making them, for fertility and health. 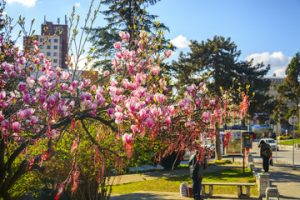 Martenitsas have various shapes. Most often they look like simple rings, but they can also be beadshaped, tassel-shaped, or with male and female figures. These figures are known as Pizho and Penda. They, like the white and red color of the ornament, symbolize the male and female conception and fertility, of which the fruits of nature will be born.
There is a tradition in some areas of Bulgaria to put into the martenitsa blue beads or coins against the evil eye. 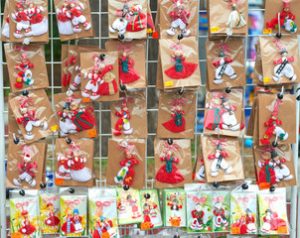 Martenitsas can be worn from March 1, and they can only be removed when you see the first swallow or stork. After that they should be removed and hung on a flowering tree for fertility.
Nowadays the tradition is still alive and brings great joy to children. On the first of March
young and old people bless Baba Marta and give each other martenitsas. It is believed that
only the presented martenitsas bring health.

Martenitsas can also be bought, but many people prefer to make them themselves as a symbol of good wishes to those who will receive them. In order to make a martenitza you need white and red wool yarn.