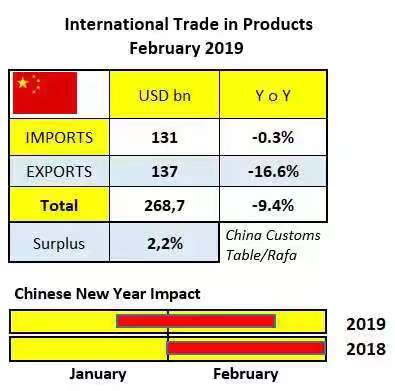 If the sharp plunge in China’s exports in February shows anything, it’s that a gap is opening between what the country is shipping out and its still resilient imports of major commodities.

Exports dropped 16.6 percent in February from the lst year, the largest decline in three years and much bigger than the 4.8 percent fall forecast by analysts.

For some observers this will be enough to confirm that the world’s second-largest economy is struggling under the weight of the trade dispute with the United States and generally softer global growth.

A look at the imports of major commodities, however, paints a somewhat different picture, with crude oil, coal, iron ore and copper all performing reasonably well.

There is little point in looking at the February trade numbers in isolation, given the impact on trade flows caused by the timing of the Lunar New Year holidays.

Nonetheless, crude oil imports were 10.23 million barrels per day (bpd) in February, the third-highest on a daily basis and above January’s 10.03 million bpd.

For the first two months of the year, crude imports were 10.8 percent higher than for the same period last year.

While crude demand is likely to have been boosted by inventory building at new refineries, it’s also likely that fuel use is fairly robust due to increased construction activity.

Exports of refined products were down 14.4 percent in February from January, suggesting the additional crude imported is staying in China to meet local demand.

Copper imports in February may initially look somewhat soft, but the details are more encouraging.

Turning to copper ores and concentrates, while February saw a drop of 10.4 percent from January, imports for the first two months of the year were 12.7 percent higher than for the same period in 2018.

It was much the same for iron ore, with February imports looking soft at 84.27 million tonnes, but the total for the first two months coming in at 184.74 million tonnes, a gain of 5.4 percent over the same period in 2018.

It’s worth noting that the growth rate for iron ore imports in the first two months is substantially higher than what was achieved in 2018, when imports for the whole year actually dropped 1 percent from the prior year.

For coal, imports were down in February to 20.9 million tonnes from January’s 27.8 million, but the first two months of the year were 14.4 percent up on the same period last year.

This strength in the imports of major commodities doesn’t fit well with the weakness in exports.

It may be that commodity imports are a lagging indicator and will start to weaken in coming months, especially if China’s export-orientated manufacturing industries continue to struggle.

Or it may be that the resilience in commodity demand is a sign that Beijing’s efforts to stimulate the economy are starting to bear fruit, with demand for raw materials preceding an uptick in industrial output and construction.