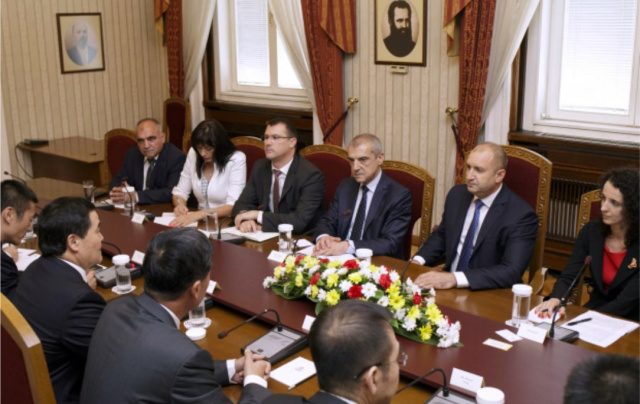 Bulgaria is the shortest route that connects China with Europe, making our country the most advantageous entry door to China for the European Union. This was stated by Head of State Rumen Radev at a meeting of Dondukov 2 with representatives of Chinese companies involved in the implementation of the One Belt, One Road initiative. The conversation is a continuation of the Bulgarian President’s state visit to China in early July this year, on which a number of leading Chinese companies were invited to invest in the development of Bulgarian transport, energy, tourism and innovation.

Representatives of the leadership of China Railway International Group, a world leader in rail and transport infrastructure, and Touchstone Financial Holding Group, a leading financial group structuring the implementation of international strategic projects under the One Belt, One Road Initiative, together with more than 20 leading Chinese public and private companies, Chinese investment funds, banks and insurance companies, participated in the meeting.

The guests informed the Head of State about their plans to create a platform for investment and implementation of Strategic projects in the field of infrastructure, energy, agriculture, technologies in the countries of the 17 + 1 initiative. Possibilities for opening a regional centre for the development and implementation of this financial and project platform are also being explored in Bulgaria.

President Rumen Radev expressed satisfaction that just one month after his visit to China, the country was already interested in the strategic partnership guidelines outlined during the meeting between the Bulgarian and Chinese heads of state.

Rumen Radev noted that Bulgaria actively supports the One Belt, One Road and 17 + 1 initiatives for cooperation between China and the countries of Central and Eastern Europe. It is no coincidence that a Global Partnership Center for the initiative is foreseen in Bulgaria. According to the President, the volume of the Chinese goods for Europe is growing every year, which requires large and modern logistics centres in Europe, and Bulgaria offers some of the best conditions for this.

The Bulgarian head of state recalled the three priority projects he presented during his visit to China at the invitation of his colleague Xi Jinping: the opening of a direct Sofia-Beijing air line and a branch of a Chinese bank in Bulgaria, as well as the establishment of a Bulgarian-Chinese centre for research and innovation in Bulgaria. Their aim is to facilitate trade and investment exchanges and to stimulate Chinese investors. The president added that during his visit to Croatia on his own initiative, he and Croatian President Kolinda Grabar-Kitarović sent a joint proposal to Xi Jinping to open the Beijing – Sofia – Zagreb air route. Bulgaria can present many complexes of opportunities. We are open and ready to develop these opportunities, said Rumen Radev.

Bulgaria’s location is strategic and the country actively supports the 17 + 1 initiative, said Kenny Song, chairman of Touchstone Financial Holding Group. According to him, this is a prerequisite for the financial group to plan to open a branch in Bulgaria. We sincerely wish that within the One Belt, One Time initiative, China and Bulgaria should find more opportunities for cooperation, more real projects, he noted, adding that they were ready to stimulate more projects. China Railway International Group President said they are exploring the Bulgarian business environment and specific projects, including the Port of Varna.

China and Bulgaria already have excellent cooperation, but we believe that there is still huge potential and prospects for development, said the People’s Republic of China ambassador to Bulgaria, Dong Xiaojun. According to him, the visit of the Chinese delegation is aimed at realising the consensus on mutually beneficial cooperation reached at the meeting between the heads of state of China and Bulgaria during the visit of Rumen Radev. 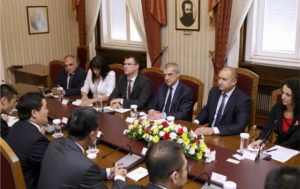