UPDATE: ‘Unassuming gem’ Croatia to get boost from Ctrip 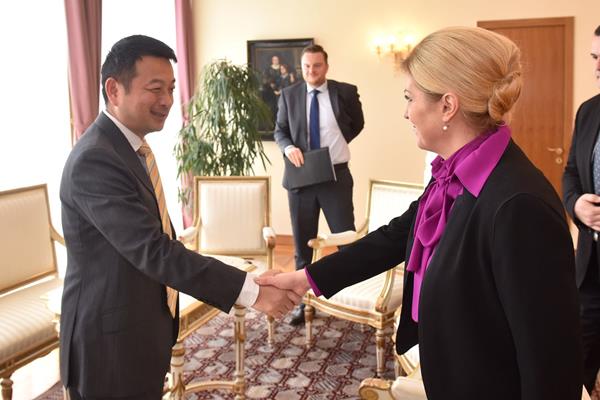 Ctrip.com International Ltd. co-founder and Executive Chairman of the Board James Liang was invited to meet with the Croatian President Kolinda Grabar-Kitarović in the capital Zagreb. Their discussion touched on the achievements of both countries in the tourism industry, policy reforms and cultural exchange, as well as destination marketing, among others.

President Grabar-Kitarović commended Ctrip’s contributions to the tourism industry of China and Croatia, while also expressing hope that Ctrip and Croatia will continue to collaborate to improve the recognisability of Croatia among Chinese outbound tourists. Both agreed that although recent years have seen an increase in Croatia-bound Chinese tourists, with its rich cultural and economic tradition, Croatia has much more to offer. In order to address this, James Liang vowed to help promote Croatia as a destination on Ctrip’s platform, to improve recognisability of this unassuming gem.

An unassuming European gem
In recent years, increasing numbers of Chinese tourists have flocked to Europe, making the region second only to Asia in terms of visitor numbers. Situated in south-east Europe, on the Balkan Peninsula bounded by the Mediterranean Sea, Croatia has become one of the fastest growing destinations in terms of popularity.

Croatia has always been favoured destination for seasoned travellers, but until recently, it has remained a relatively obscure location for most Chinese tourists. The choice of the historical town of Dubrovnik as the filming location for Game of Thrones was the driving force behind a gradual increase in Croatia’s appeal. According to official statistics, 159,000 tourists visited Croatia in 2017, a year-on-year increase of 50%.

In 2018, Croatia’s second-placing in the World Cup further sparked the interest of Chinese travellers. Ctrip statistics show that in the same month, there was a month-on-month increase of 500% in Croatian hotel searches, a trend that would continue throughout the 2019 Spring Festival holiday period. Between February and March 2019, China had become one of the top ten origins for Croatia-bound tourists.

During the recent International Labour Day holiday period, bookings of various types made on the Ctrip platform, including group tours, independent trips, personalised itineraries, among others, saw a 450% year-on-year increase in Croatia-bound tourists. Statistics also reveal that Croatia is most popular among male clients, accounting for 57% of sales. In terms of age, almost 50% of Croatia-bound tourists are 20-40 year-olds.

Ctrip promises President Grabar-Kitarović closer collaboration
During a visit to Croatia this April, Chinese Premier Li Keqiang announced the launch of the Year of Culture and Tourism in Croatia and China. This marked China’s first Year of Culture and Tourism partnership with a Central and Eastern European nation, and was another milestone for the development of the tourism industry in both countries. The meeting between Ctrip Chairman James Liang and President Grabar-Kitarović is a testimony to the substantial responsiveness of the tourism industry to the initiative, and is symbolic of the overall advancement of collaboration in tourism for China and Croatia. In dialogue with President Grabar-Kitarović, James Liang indicated his primary concerns for outbound tourists based on Ctrip’s experience. These included travel safety, visa convenience, the availability of direct flights, and availability of Chinese language instruction and guides. He called on the Croatian government to make visas more readily available to Chinese tourists, and recommended the provision of multilingual guide services, which should include Chinese.

Ctrip has publicly announced its future plans to improve collaboration with Croatia in various areas, including product development, technology, and destination marketing. Ctrip’s data analysis draws a vivid picture of its users and their consumption habits, providing a basis for targeted product development and data-informed marketing. The Croatian government has also indicated that it will continue to support Ctrip in the future, including the provision of exclusive access to tourism resources.

Ctrip has maintained a close partnership with the Croatian National Tourist Board, which opened its Shanghai branch last year, and local tourism businesses, working to develop the emerging Croatian market. A representative of Ctrip said in a statement that currently, Croatia-bound group tour products are primarily based around the Balkan route. In 2019, over 100 new products based around the ‘Serbia, Montenegro and Croatia’ and ‘Italy and Croatia’ routes have gone online, and have been well-received by Europe bound travellers seeking in-depth tours. In the future, a 9-day in-depth Croatia-bound private tour will be launched, at a cost of between 20,000-30,000 RMB.

In recent years, Chinese outbound tourist numbers and expenditure have remained the highest in the world. Further to the development of the Chinese outbound travel industry, James Liang has called for an emphasis on the development of the inbound travel industry, as means of allowing international tourists to better understand contemporary China. The rise of China’s second and third tier market and Ctrip’s development of the Croatian market will breathe new life into co-operation in the tourism industry, and will be an important platform for trade and cultural exchange between the two countries.