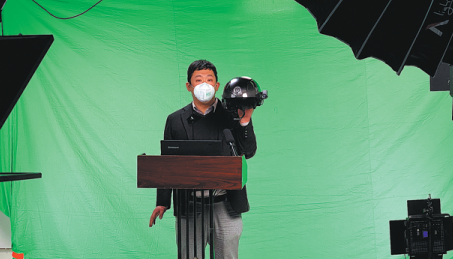 The Chengdu city government held a matchmaking conference to display an array of new devices and equipment that can be utilized in the fight against COVID-19 on March 26, as the world battles to get the pandemic under control.

The release was broadcast online, inviting business professionals from home and abroad to share their latest solutions and applications with global customers.

It’s vital to get the information out about protective products, and the broadcast provided such a method, said Agustina Casavalle, deputy consul general of the Consulate General of Uruguay in Chongqing.

Casavalle noted the products made in Chengdu, including the protective helmets, disinfecting devices and remote diagnosis and treatment solutions using 5G technology. She expressed her hopes for further commercialization.

Currently, Bavaria in Germany has a large demand for masks, protective gear and other medical materials, according to Zheng Lanrui, a representative of the State of Bavaria China Office.

High-end technological products to tackle the virus are also needed, such as environmental monitoring devices, appliances for disinfection and sterilization and virus-testing kits.

She added that the online broadcast with Chinese and English subtitles enabled more people to learn about these products. Next, more channels will be opened up for information exchanges to promote cooperation between the suppliers and customers.

“In response to the COVID-19 pandemic, Chengdu has widely used big data and internet-based products. These advanced technologies provided strong support for the epidemic control, which is worthy of praise and attention,” said Roland Xi, CEO of Polygon Precision Group.

Xi said his company will focus on the enterprises in Chengdu producing intelligent temperature detection and medical devices. He expressed his willingness to cooperate with them in developing automatic production lines related to healthcare in the future.

Since the outbreak of COVID-19,Chengdu has done a good job in epidemic prevention by using scientific and technological tools, such as the intelligent temperature measurement, infrared detection and patient screening systems using artificial intelligence in communities and workplaces, said Yan Bohua, deputy office director from a national clinical trial center of traditional Chinese medicine located in Chengdu.

According to an official from the Chengdu science and technology bureau, since the outbreak of COVID-19, Chengdu has launched a series of new technologies and products. In the field of virus detection, Chengdu enterprises developed various testing kits, providing an all-round testing system.

The testing kits produced in the city have been sold to more than 40 countries and regions, including Spain, Italy, Qatar, the United Arab Emirates, the Philippines, Romania and Bulgaria.

The smart sterilization kits have been put into use in the United Kingdom, Italy, Germany, France and Vietnam. At present, a variety of those products are applying for export qualifications.

Local enterprises also applied 5G communications platforms to remote image diagnosis and screening. Through advanced technologies such as AI and big data, those platforms have improved diagnosis and treatment efficiency.

A multifunctional epidemic prevention solution using drones and portable emergency-response video terminals have also been used on the front line.

“In the fight against the epidemic, Chengdu enterprises have developed so many high-tech products. We have the responsibility to promote the products to the world and make contributions to the global anti-epidemic work,” said Nie Hong, a director from the Chengdu science and technology bureau.

Nie said that the event attracted a group of foreign-funded enterprises and those engaged in foreign trade services. Many have built up partnerships through their online platforms.

According to the organizers, the broadcast has been viewed 1.68 million times, with 35 foreign-funded enterprises in Chengdu taking part agreeing to more than 30 initial cooperation intentions.