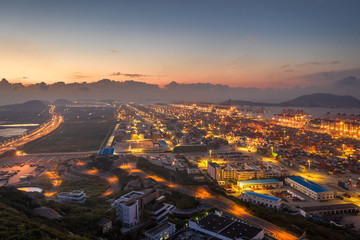 They made the remark after the State Council, the nation’s Cabinet, released plans for the new pilot zones in Beijing and in Hunan and Anhui provinces on Sept 21, boosting the number of the country’s FTZs to 21.

Wang Shouwen, vice-minister of commerce, said the move shows the country’s resolve to pursue high-level opening-up and ensure the safety and stability of the industrial and supply chains.

China set up its first FTZ in Shanghai in 2013 to attract more foreign investment and promote trade and regional integration. Since then, the country has added 20 zones, including those in such diverse areas as the coastal provinces of Fujian and Guangdong and the inland provinces of Shaanxi and Sichuan.

The pilot FTZ in Beijing will cover an area of 119.68 square kilometers, including three areas for science and technology innovation, international business services and high-end industries, according to the government plan.

Beijing will build a pilot zone for digital and big data businesses to boost technological innovation and opening-up of its services sector and digital economy, he said.

He Baoxiang, vice-governor of Hunan, said that with new policy support and backed by a large number of export-oriented manufacturers, construction projects and service providers, the FTZ in Hunan aims to boost outbound direct investment and international cooperation, in particular with African countries and those related to the Belt and Road Initiative.

The FTZ in Hunan will further improve the local business environment while promoting innovation and improving the intellectual property protection system, as well as encouraging more cross-industry cooperation with companies in the province, said Fernando Teixeira, CEO of Valin ArcelorMittal Automotive Steel Co in China, a Sino-European joint venture that has been working in steel production in Hunan for more than six years.

“Benefiting from strong transportation links to the eastern hub with Shanghai, the southern hub with Guangzhou and the western hub with Chongqing, we believe the Hunan FTZ will enable tremendous opportunities for the growth of Central China,” he said.

Zhu Congjiu, vice-governor of Zhejiang, said Ningbo will be allowed to expand its pilot FTZ and the provincial government has made specific plans to build the zone into a global shipping hub, an influential oil and gas resource allocation center, a supply chain innovation center and a high-quality smart manufacturing demonstration area.

Wei Jianguo, vice-chairman of the China Center for International Economic Exchanges, said China’s latest move to establish and expand FTZs demonstrates its efforts to further open up its economy despite the COVID-19 pandemic and rising unilateralism globally.

While China is working to give full play to its huge domestic market, it is still committed to promoting economic globalization, he said, adding that the country needs to improve its global ties to boost its strong domestic market, and FTZs will play a vital role in promoting the efficient allocation of resources.