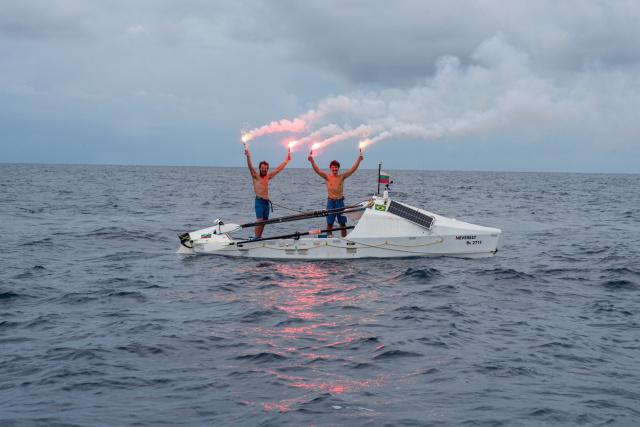 Stefan Ivanov (48) and Maxim Ivanov (17) are rowing across the Atlantic from east to west. If the Bulgarian father and son complete the row, they will become the first to make the crossing during the hurricane season, and Maxim will be the youngest person to row an ocean.
Nearly two years ago, the pair began building their boat Infidelity. Finally, on June 14, they started their Atlantic row from Portugal. They initially planned to row to Brazil, but because of COVID-19 restrictions, they are now aiming for Barbados.

So far, they have covered 6,850km, and have just over 1,100km left before reaching the former British colony off the north coast of South America. They are in the hurricane belt during the last stretch of their journey, so they have had to stop and use their sea anchor for a few days to wait out the tropical storms. “No wonder no boat has crossed the Atlantic during the hurricane season,” said father Stefan. “The boat jumps in the waves like a wild horse that refuses to be tamed.”
For the first two months, they rowed continuously in two-hour shifts, averaging 100km a day. But around the 70th day, they entered an area of no wind that slowed them significantly. Damages to the boat, adverse weather and the changes of route because of the pandemic have also lengthened their journey. They had thought the row would take between 60 and 90 days, but they are now on day 100.

As a result, their food supplies are getting low. They recently caught 11 big fish, so sushi has been on the menu a lot lately.