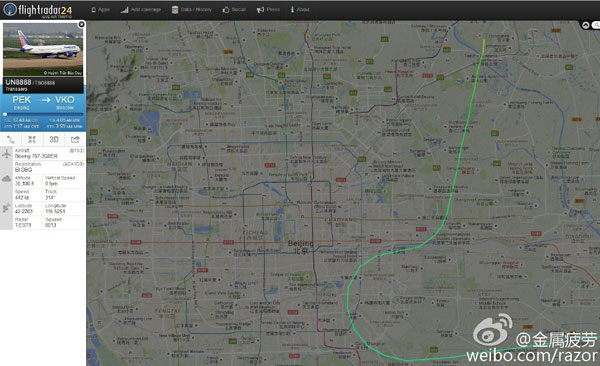 In today’s trending, a Russian plane flies dangerously close to downtown Beijing, a man advertises to fill the position of his girlfriend, driver drinks wine in front of traffic policeman, and suicidal woman saved by her dress.

A Russian Transaero passenger plane flying from Beijing to Moscow flew over downtown Beijing around the second ring road, instead of staying on the fifth ring road and heading to north as scheduled, according to a WeChat account by aircraft enthusiasts on Thursday.

According to the account, called “flyerbar”, the Russian plane took the wrong route because the pilot made a mistake in direction.

The plane was supposed to take off heading south then turn to the east then to the north, but after taking off, the plane flew to the west instead of the east, causing the plane to fly directly over the city center.

Luckily the ground control staff noticed the huge mistake and notified the captain to change routes to correct his course.

Many Internet users who live downtown posted on Weibo saying they heard the loud noise of the plane and some of them even saw the plane flying right over their apartments.