Bulgarian Wines: Where to Taste the Region’s Finest one 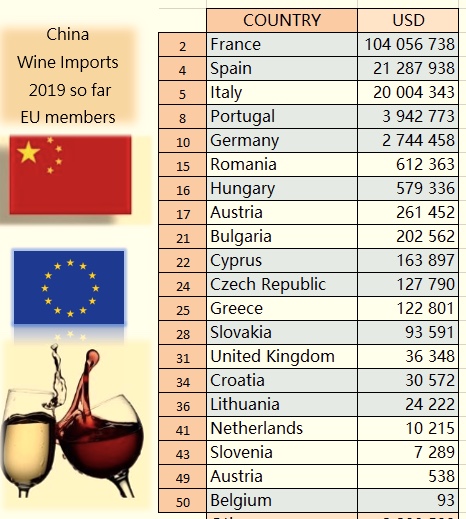 As you see by picture Bulgaria is 21 st larges importer of wines in China. Wine and Gourme tourism is very popular in Bulgaria. Bulgarian wine production is a long way from being in its best shape when it comes to volume, but the country’s centuries-long tradition of viniculture is slowly reviving.

With more and more small-scale wineries opening up across the country, taking over the old Communist-era Vinprom sites, the focus is now being put on quality wines for more refined audiences and exports instead of mass production.

There are three key regions for Bulgarian wine-making, according to wine experts – the north-west, where the vineyards of Belogradchik, Vidin, Oryahovo, Borovitsa and Burgonzone benefit from the mild climate and produce some of the most famous indigenous varieties of grapes, Gamza and Tamyanka.

The unique microclimate of the Struma river valley, the fertile soil and the welcoming atmosphere created by the locals makes this region interesting in terms of wine tourism as well.

He cites the Villa Melnik, Logodazh, Kapatovo and Medi Valley some of the top vineyards in the region, which boasts unique grape varities like keratsuda and sandanski misket.

In the north-east Bulgaria meanwhile, the cooler climate is conducive to the growth of more European varieties like riesling, pinot grigio, pinot noir and cabernet franc.

There are various events and traditions associated with wine-making and consumption across the country, but two that stand out are the Young Wine Parade that takes over the ancient cobblestone-covered streets of Plovdiv’s old town in the last week of November, and the Trifon Zarezan celebration in mid-February.

The former sees hundreds of people threading past Renaissance-era houses and galleries, tasting the best new wines from across the country until the late hours, while the latter is the Bulgarian alternative to Valentine’s Day, similar to the annual event in neighbouring Macedonia.

In a tradition that can be traced to pagan and ancient Greek rituals in praise of Dionysius, Bulgarian grape-growers gather on the early morning of February 14 to prune their vines, pray for a good harvest and taste the previous year’s produce.