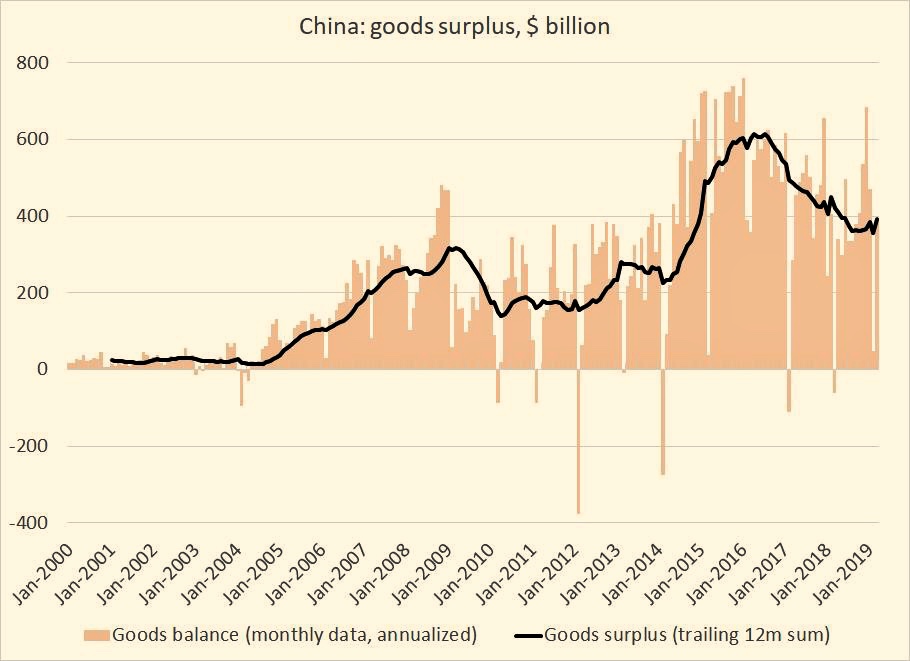 China’s imports plummeted in March while exports rose sharply, official data showed Friday, adding to worries about slowing growth in the world’s number two economy amid a US trade war.

Economists polled by Bloomberg had expected a slight 0.2 percent rise in imports with exports projected to grow 6.5 percent.

“There are uncertainties coming from the weaker momentum of the global economy and trade growth and the complex global environment,” said Li Kuiwen, a customs spokesman.

“Overall China-US economic and trade frictions have had a definite impact on business operations but we believe it’s generally controllable,” he told reporters.
Beijing has taken measures to jumpstart its cooling economy with massive tax cuts and fee reductions but the falling imports point to tepid demand at home.

It raises questions about the current strength of domestic demand, especially as rising oil prices should have pushed up imports, said Julian Evans-Pritchard of Capital Economics in a note.

“While import volumes are likely to remain subdued, they will probably recover somewhat in the near-term as policy stimulus helps to shore up demand,” he said.

Last month, officials lowered China’s annual growth target to 6.0 to 6.5 percent for the year, down from 6.6 percent last year.

Washington and Beijing have slapped tariffs on more than $360 billion in two-way goods trade, weighing on the manufacturing sectors in both countries.

China’s politically sensitive trade surplus with the US widened to $20.5 billion last month from $14.7 billion in February.

“This is beyond doubt,” he said.

Soybeans imports, traditionally one of the big ticket items shipped from the US and one of the tariff targets, fell by 14.4 percent from last year during the first quarter.

However, analysts caution it is difficult to compare trends in China’s data at the start of the year due to the Chinese New Year holiday, which came in early February this year and can affect business activity.