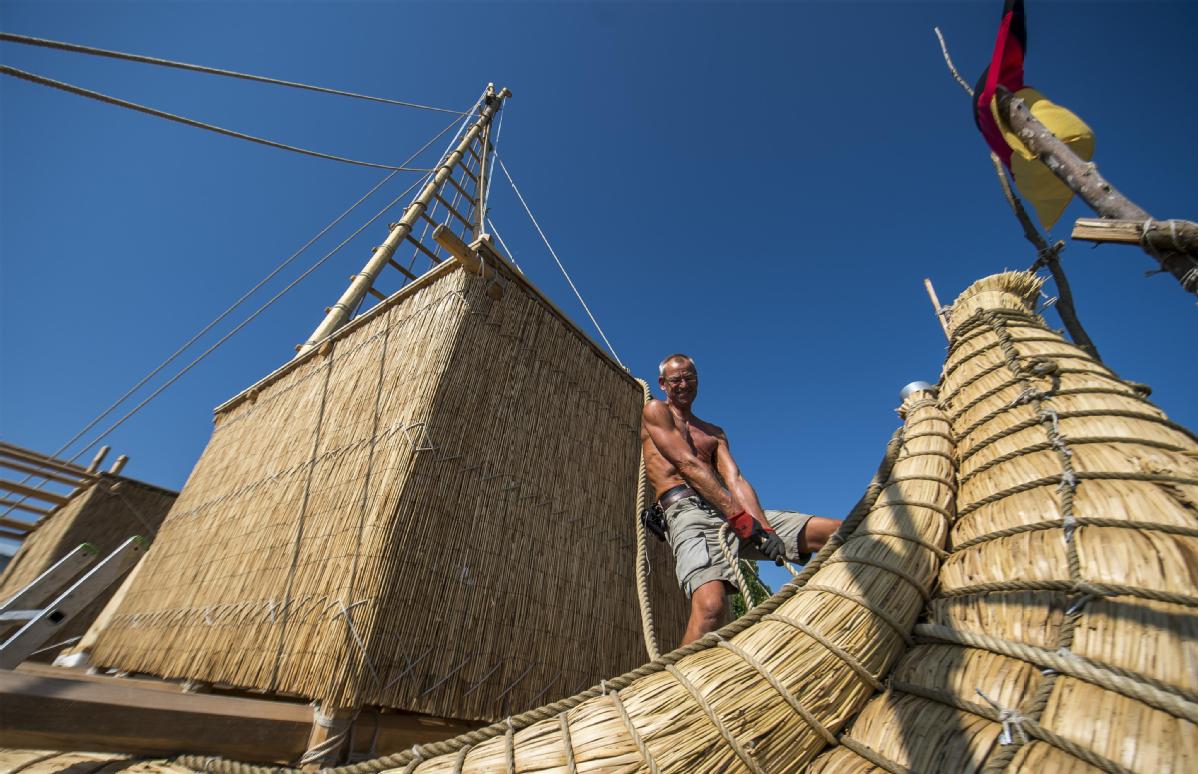 BELOSLAV, Bulgaria – Were the ancient Egyptians able to use reed boats to travel as far as the Black Sea thousands of years ago?

A group of adventurers believe so, and will try to prove their theory by embarking on a similar journey in reverse.

In mid-August the team of two-dozen researchers and volunteers from eight countries will set off from the Bulgarian port of Varna, hoping their Abora IV reed boat will take them the 700 nautical miles through the Bosporus, the Aegean and as far as the island of Crete.

The ancient Greek historian wrote: “Egyptians sailed through the Black Sea to get materials that they could not have from the east Mediterranean.”

Goerlitz, 53, and his team said they drew inspiration for the design of the 14-meter boat from ancient rock drawings from Egypt and the Caucasus.

The construction was carried out with the help of volunteers and two members of the Aymara indigenous community from Bolivia’s Lake Titicaca, Fermin Limachi and his son Yuri.

It is no accident that the Abora IV bears a striking resemblance to the famous Ra II reed boat that Norwegian adventurer Thor Heyerdahl used in his 1970 attempt to cross the Atlantic – Limachi’s father helped build that vessel too.

Large bundles of totora reed were lashed together with ropes to form the main body of the vessel before it was equipped with a wooden mast and two reed compartments for sleeping.

In all, 12 tons of totora reed and two kilometers of rope went into making the boat, which will have two sails – measuring 62 square meters 40 square meters, Fermin said.

“The main question of all is whether this boat … is able to cross the difficult island shelves of the Aegean Sea,” Goerlitz said.

Reaching the Cyclades Islands and then Crete will be crucial for proving his initial hypothesis, he added, as the Minoan civilization which flourished there from 2,700 to 1,200 BC was long proven to have traded with Egypt.

Once hoisted into the water on Thursday, the boat will need two-and-a-half weeks to soak, absorbing between five and 10 tons of water.

Thanks to the billions of air chambers inside its porous construction material, the boat cannot crack or sink, according to Goerlitz.

During his last such expedition, aboard the Abora III in 2007, he set out from New York bound for southern Spain in a bid to prove that Stone Age man made similar trans-Atlantic journeys.

“I am 100 percent sure that this ship will never sink. And as long as the ship is floating we have a safety raft here,” said volunteer Mark Pales, a 42-year-old electrician from the Netherlands.

Another volunteer, Heike Vogel, a parcel company employee from Germany, was looking forward to her first time sailing, after helping on two previous expeditions without venturing on board.

In order to communicate with large cargo vessels on their way – a major danger on the high seas – Goerlitz’s crew will have modern satellite and radio communication equipment on board.